California: Death Valley, hiking along the ridge above Golden Canyon.

'WHAT IN THE WORLD IS HIKE ABOUT?'

Hike-about is an adventure that commenced June 2010. After storing our household movables, ridding ourselves of a house but retaining our 'home' together, we set off with the purpose of hiking in different parts of the world, not forgetting the home country, the USA.

Our primary focus is hiking to mountain peaks but any challenging hike will do just fine. Extended stays enable us to enjoy and experience living in various places amongst differing cultures. Hike-about has evolved into a way of life. It's also a process of discovery, both the world and ourselves.

We work and live 'on the road' but return to the city in which our grandchildren reside, every couple of months. This provides us the wonderful opportunity to be with them as well as a child or two, even three and of course, friends.

By December 2019, the blog contained over 1,100 hikes, each a set of pictures with stories and anecdotes from the trails. An index to the right allows the viewer to identify earlier experiences.

Finally, we are often asked about the journey's end. Our reply, as accurate as we can state, is: "When we are either forced to cease through health issues or the enjoyment level no longer reaches our aspirations, we will hang up the boots."

"A Life Experience As No Other: Dare to Seize the Day Together", published by Fulton Books, depicts our life on the road and mountains.

Whereas we continue to update the blog regularly, we no longer circulate email notifications each time, VIP's excepted and special occasions.

Jenni closing in on the ridge after a big climb. 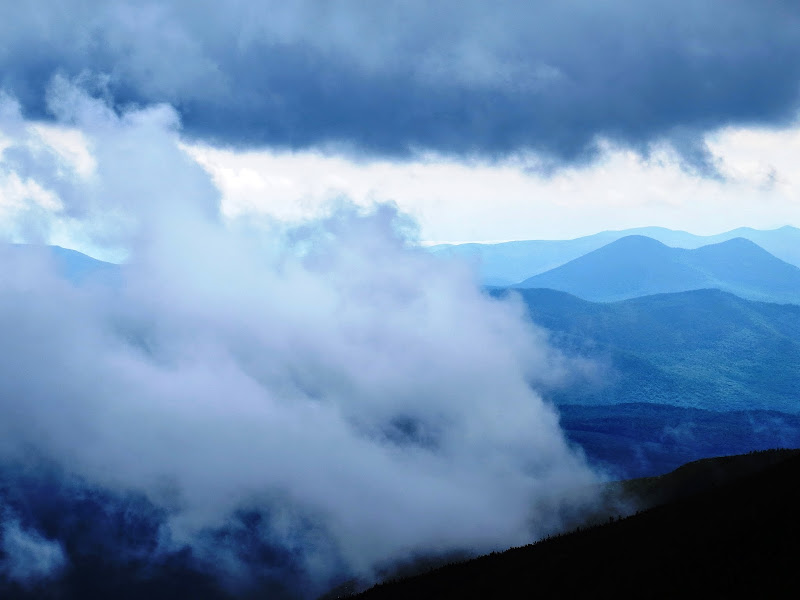 Although the wind was moderate where we stood, it played havoc with the clouds in the valley.

We usually produce a video after a chapter of Hike-about. For a few reasons, the format of today's hike
will be displayed partly as photographs (still) and as a movie or video. It covers the Boott Spur trail which
rises 3,500 feet with a cumulative gain of closer to 4,000 feet over rough terrain. It is probably one of the
toughest hiking experiences we have endured. Although the climb was steep, difficulty is increased by the terrain
which is very rocky, often through water and at times, dangerous. One needs to concentrate at all times,
particularly on the way down. The views are overwhelming and quite different. Most of the big hikes, rated
independently, are difficult, tough and beautiful. Following a climb to the peak of Mount Madison two days earlier,
that was 4,400 feet over 9 miles, we are now in full rest mode. By the way, the weather has moderated...sounds nice. 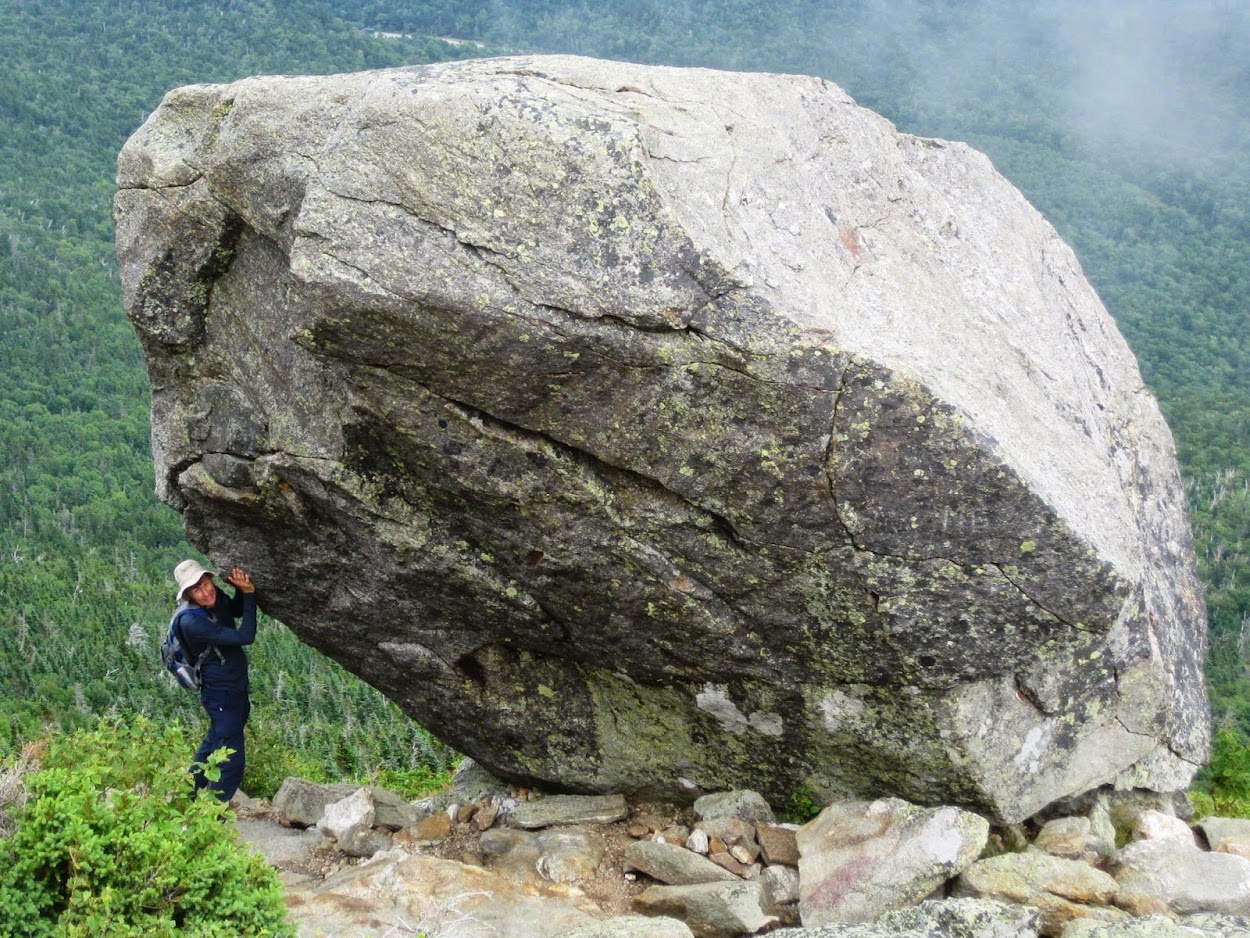 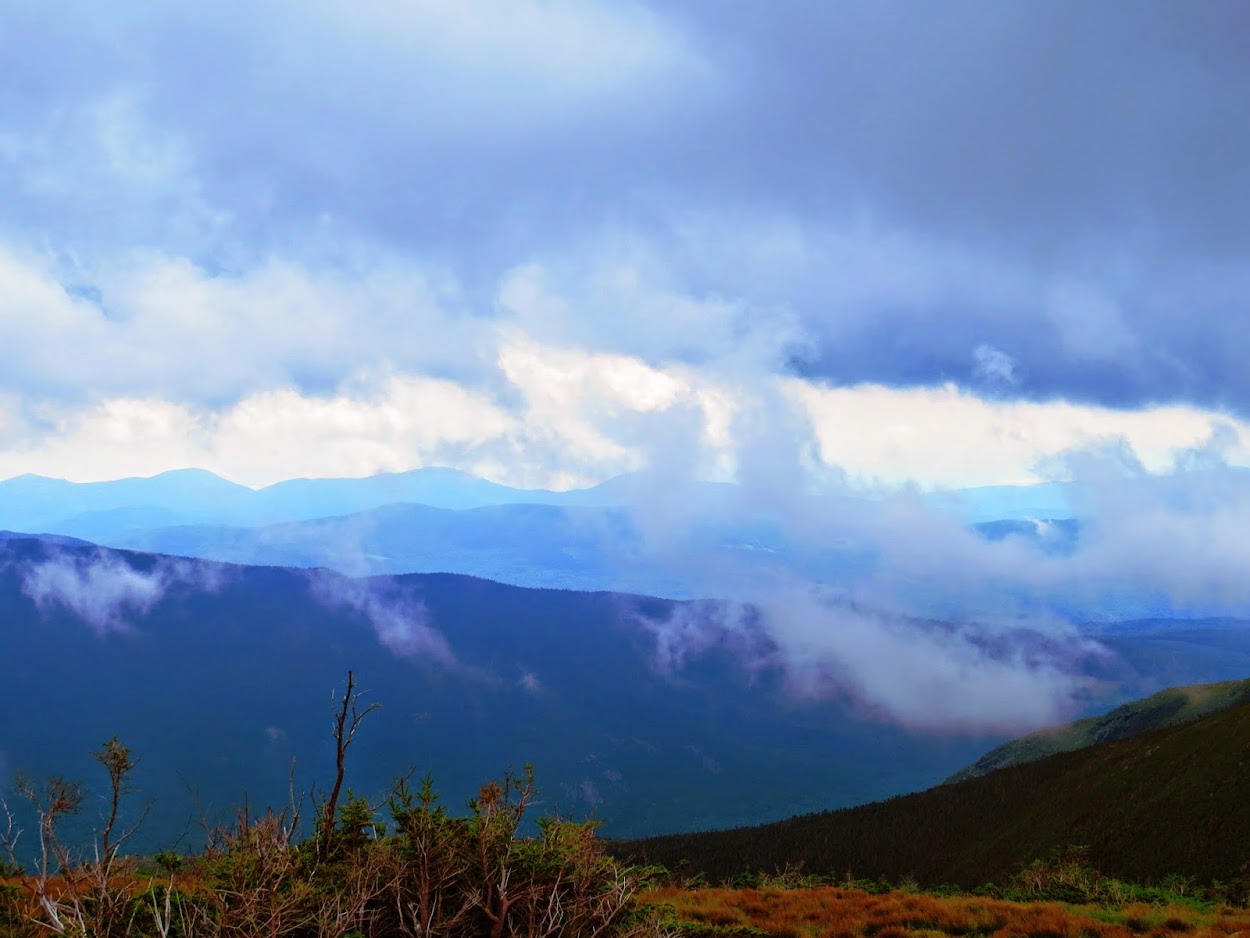 The sights up above are mesmerizing. We don't think you had to be there although it makes a difference. 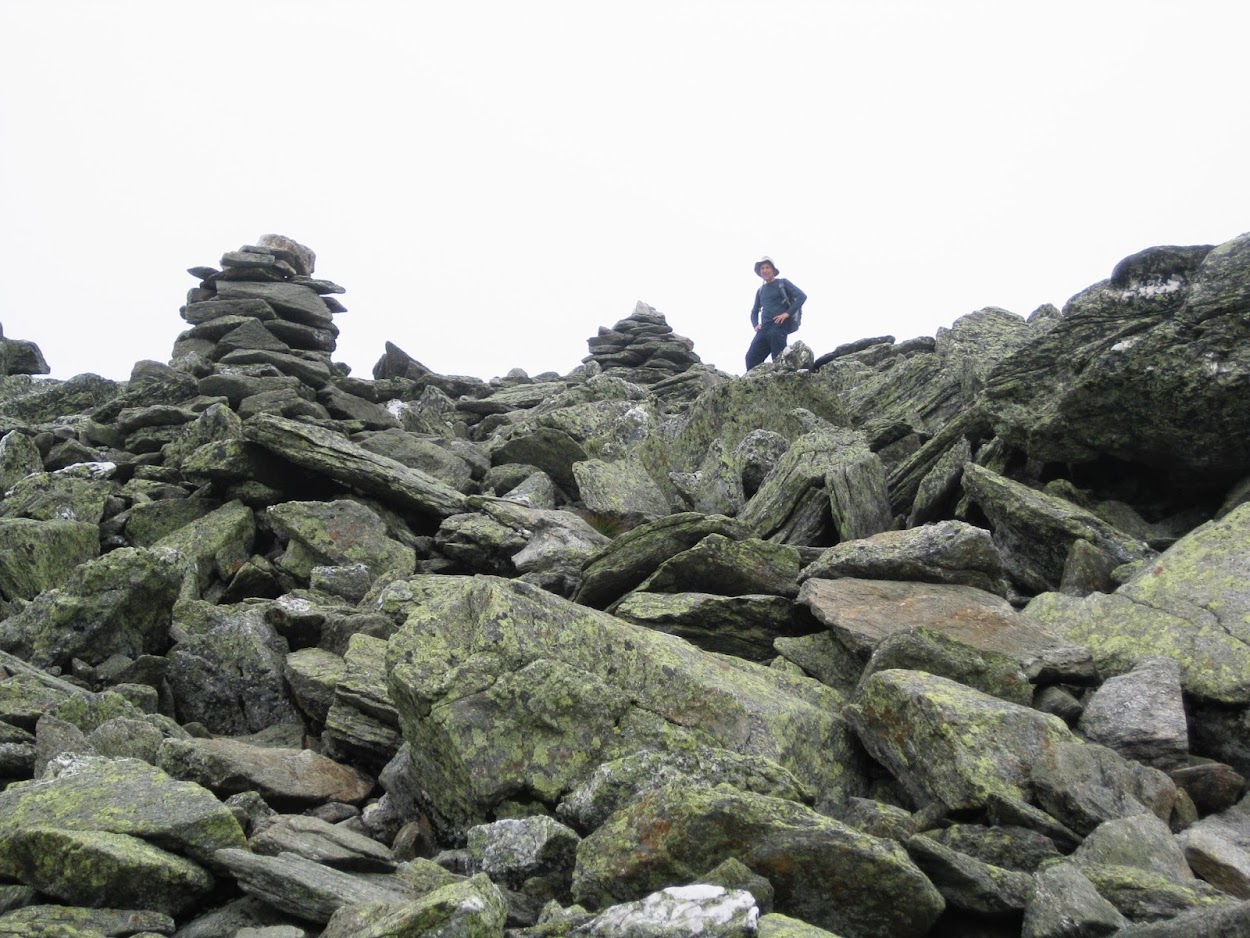 The last climb over talus before the peak.

We spent a week in Gorham, the commercial hub (in a manner of speaking) of the region, saw a little
of Berlin but mostly, spent time on the trails and mountains. Big surprise! We met a number of fellow hikers,
spoke quite a lot to a few and learned a little about the people of this region. Hike-about gives us the
opportunity to visit many towns and villages, meet interesting people from different walks of life, young
and old. It seems in this part of the world, the ATV is a big deal. It's a sport(?) in which people drive
on the road to reach mud tracks at the base of mountains. Some people walk up mountains and then walk down
again. Others drive all-terrain-vehicles on mountains. Seems like a lot of strange people about. 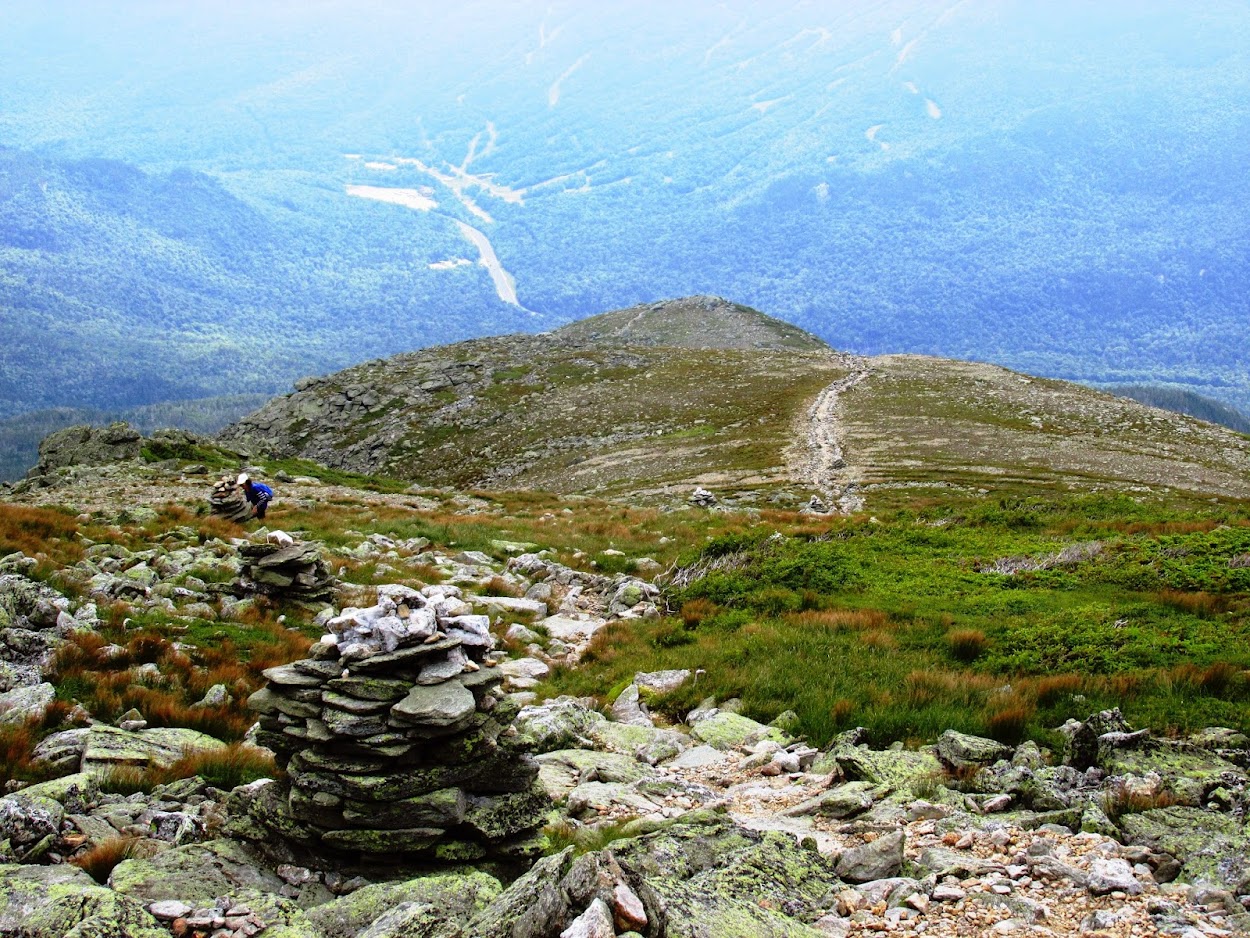 Jenni begins the grind over rocks before the talus towards the peak having commenced far below. 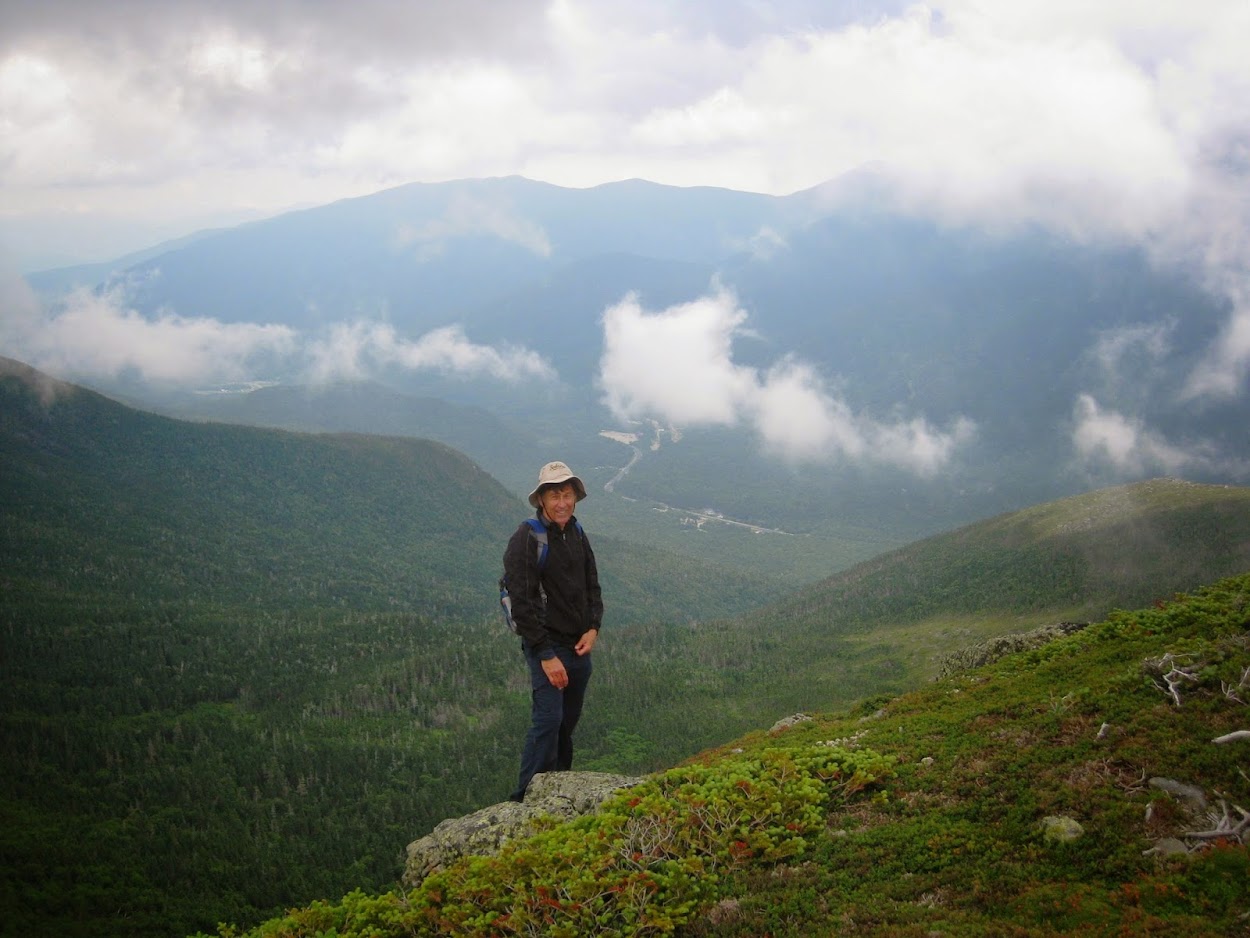 A silly grin or one of relief after an awesome but tough climb, part-way below peak.

We liked the irony of reading on the trails that hikers should be careful where they tread so as
not to disturb the sensitive plant life, rocks and soil. Then along come these wild riders churning up
the mountains with full approval of the authorities. What did we miss? Anyway back to the New England
states. We have spent time in Massachusetts in the past but not further north. The region in which we are
enjoying our days, having since moved to Twin Mountains in Carrollton, is very different from where we live
when not on hike-about. Sometimes we have to remind ourselves that we are in America. Although we have only
lived in California, the southern part, and Texas, we feel that this area is like another country. There seems
to be an English flavor to the region, especially regarding the infrastructure.

We have met people from Vermont, Maine, the locals of course, and visitors from Massachusetts, too.
We have spoken to a few 'old-timers' who tend to congregate in coffee shops or near food carts and
listened to them as they impart their wisdom. It is often interesting, sometimes amusing but always adds
to our sense of learning about people and customs in different parts of the country. The U.S. is so large
and diverse that it's really like a number of countries. Hence, one can understand (congress excluded) why a
federal system makes so much sense.

A most impressive place along the mountaintops. Hopefully, we'll be up there soon.

Coincidences continue to occur frequently. We met two young women, Hannah and Sherene. We'll tell you more
about them next time, two courageous young people on a mission.


We suggest clicking the icon at the bottom right-hand corner of the screen to view the video in full screen mode.
Posted by Jenni at 6:28 AM

Vengeance Is Mine...and mine, too. 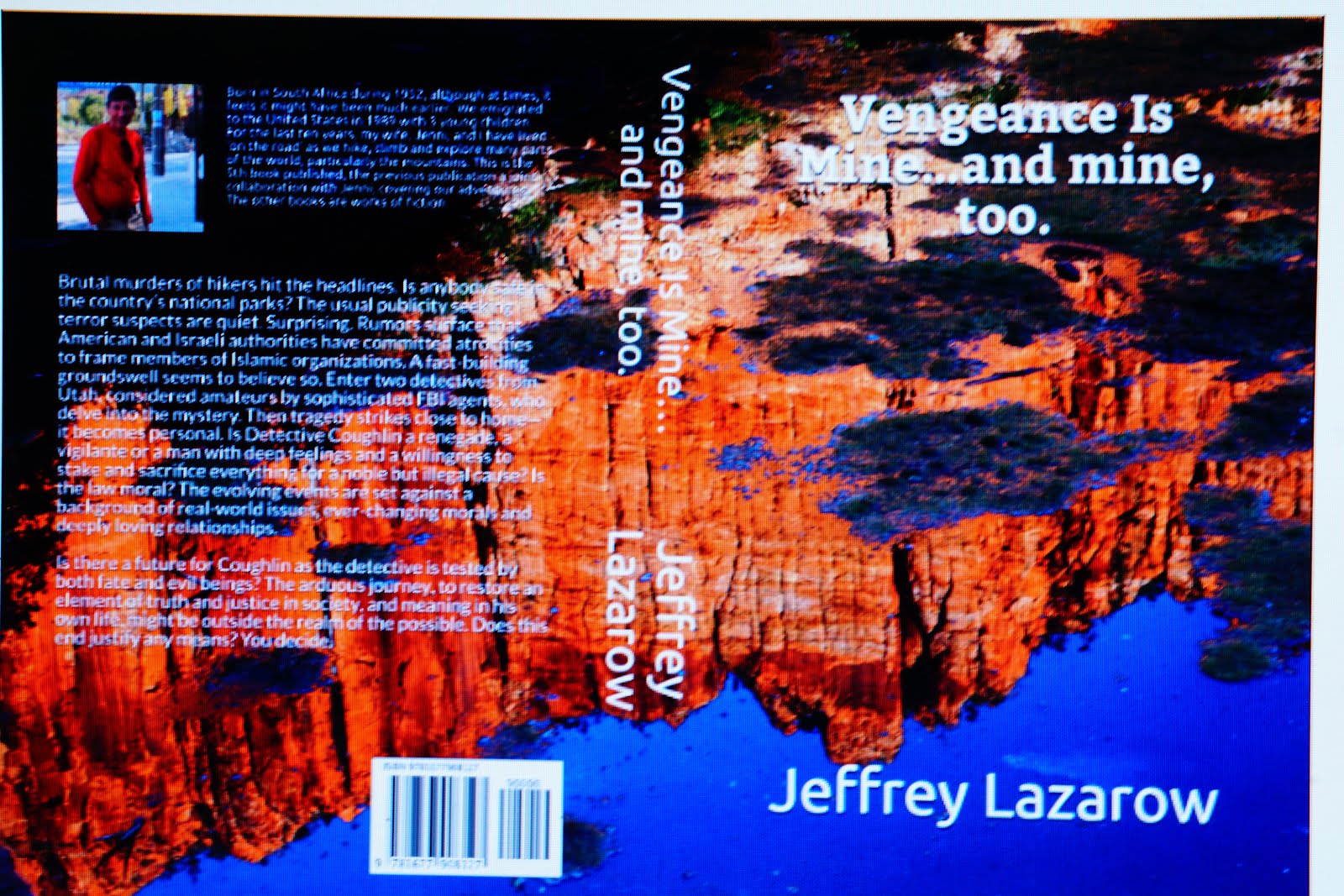 A Life Experience As No Other: Dare To Seize The Day Together. 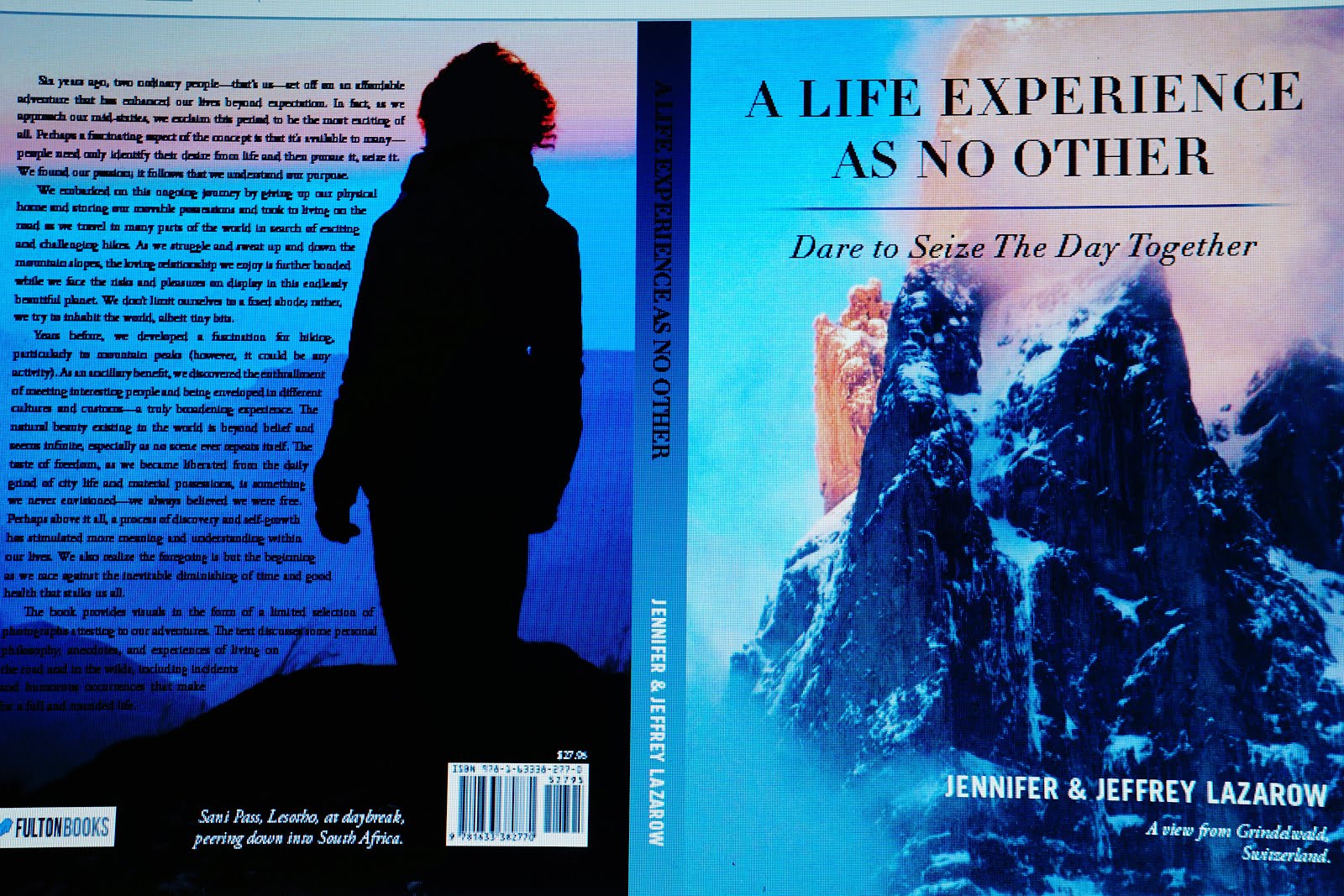